Judit Varga, head of the composition department at the University of Music and Performing Arts Vienna, is Müpa Budapest's composer of the 2022/23 season. Varga's composer's recital features, along with her own works and in a lively dialogue with them, several Baroque, Classical/Romantic and 20th century compositions that are important to her. The first half of the concert covers experimental terrain, including a piece she wrote specifically for this concert, in which trumpeter Gábor Boldoczki, Müpa Budapest's artist of the season, will serve as one of the soloists. The second part of the evening, however, will delve into more popular waters, with respect to both the classical works and Varga's own contributions.

The first half of the concert explores the possibilities of the future, so to speak, while the second half looks into the past. In Heinrich Ignaz von Biber's 1673 Battalia, for example, we hear a polyphonic, polytonal parody of drunken soldiers, while in Charles Ives's 1908 piece The Unanswered Question, its musical world beyond tonality of the trumpet solo accompanied by winds strains against the ethereal chords of the strings. Between these two pieces, we will hear Varga's 2018 work Blac...k & White, in which, as with Ives, the relationship between the individual and the community arises just as much as an (unanswered) question as it does in the composition receiving its world première: Bending Space and Time, a "concerto grosso" for three soloists - trumpet, piano and percussion instruments - and string orchestra. Appearing on the horizon afterwards in the second half of the concert will be the musical past. To represent the ”classicists”, we'll have Arvo Pärt's 1977 archaising homage to Benjamin Britten, as well as Edvard Grieg's popular Holberg Suite. Although the latter dates from 1884, it refers heavily to 18th-century music. This half also includes two works by Varga herself: the first consists of excerpts from a score for a film about Lou Andreas-Salomé, a renowned femme fatale of the early 20th century, and the second, 2019's Mosar II, incorporates both a pop tune and music Varga wrote for another soundtrack.

The concert will be preceded from 6.30 pm by a conversation entitled Prologue. For more information, please consult the Müpa Budapest website in the weeks leading up to the concert. 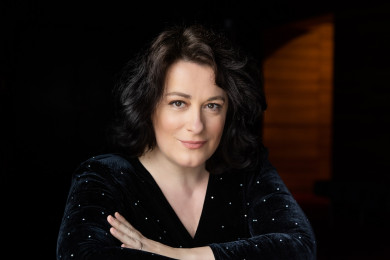