Wandering Gypsies leading adventurous lives and gallant yet ridiculous nobles abusing their power are the main characters of the animated film Szaffi. This adaptation of Mór Jókai's classic novel The Gypsy Baron is by now familiar to several generations of Hungarians. In this exciting story brought to life through the melodies of Strauss, a treasure hidden during the decades of the Turkish occupation and the love between the charming title character and the penniless Jónás Botsinkay are also key. There's no reason to worry, however: everything turns out fine in the end.

In 1985, the Pannonia Film Studio celebrated the one hundredth anniversary of the première of The Gypsy Baron with a major animated film. Directed by Attila Dargay, Szaffi was watched by nearly a million viewers after its release, and retains its popularity to this day. Its universal success can be attributed to several factors. The opulent script credited to József Nepp and József Romhányi along with the director gave an integral role to the melodies of Johann Strauss Jr., and not just fr...om his operetta The Gypsy Baron. The success of this intricate story worthy of Mór Jókai in part lies in the inclusion of animal characters elevated to the level of equality with the humans, as well as some giants of the acting profession suppling their voices. The story takes place in 18th-century Hungary, where Jónás Botsinkay, raised by nomadic gypsies, returns to the land of his ancestors as a treasure hunter, but rather than fabulous wealth (at least initially), he finds an old mother and her beautiful daughter Szaffi living near the ruined castle. Attila Toronykőy's musical production relies heavily on both Strauss's timeless melodies and the screenplay of the cult animated film. Helping him in this treasure hunt full of twists and turns will be conductor Péter Oberfrank and the Erudita Sinfonietta team.

Before the performance, between 9.45 and 10.30, we will be running a free (and playful) interactive session for children entitled Tune-up. We look forward to welcoming both school groups and individual school-age youngsters attending the subsequent performance. Please register via junior@mupa.hu by midnight on the Tuesday before the performance, specifying the number of participating children and their ages. The activity is recommended for children aged 8 and over, and will take place with a minimum of six children. 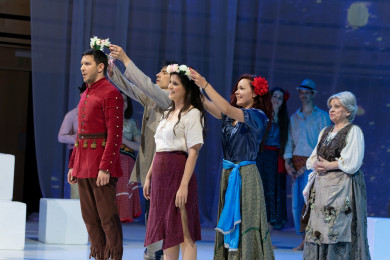