Venetian trumpet. The title speaks for itself: a concert in which we hear Italian music from the 18th century throughout, most of it by Vivaldi, but also with other works from his contemporaries Evaristo Felice Dall'Abaco, Tomaso Albinoni, Francesco Manfredini and Giuseppe Torelli. The brass sound with the brightest tone suited for the liveliest playing is a recurring experience for us: this concert features three trumpet concertos. The soloist is the internationally renowned and world-class Gábor Boldoczki, pride of the Hungarian music world and Müpa Budapest's artist of the season. Joining him will be the musicians of the great Polish ensemble the Wrocław Baroque Orchestra, founded a decade and a half ago to play historically informed music.

Celebration, excitement, light: This is what Venice means to anyone who has ever absorbed the scent of the lagoons in the rays of the setting sun. Celebration, excitement, light: Doesn't the wonderful sound of the trumpet mean the exact same thing to all of us? It is this instrument - simple in structure but extremely difficult to master - that Boldoczki plays, and not in any old way, either: he is one of the best trumpeters of our time. It is also difficult to list his successes. In 2004,... he became the first trumpet player in the world to perform as a soloist at the Salzburg Festival. He performs in such venues as Vienna's Musikverein, the Berliner Philharmonie and, in Paris, the Salle Gaveau and the Théâtre des Champs-Elysées. He has taken the stage with ensembles like Kremerata Baltica, conducted by Gidon Kremer, and the Gulbenkian Orchestra, playing under the baton of Lawrence Foster. He was won several prestigious Hungarian and international awards. The name for the concert programme, Tromba Veneziana, comes from the artist's album of the same title. Founded by Andrzej Kosendiak, the Wrocław Baroque Orchestra gives highly successful concerts at home and abroad, collaborating with such conductors as Philippe Herreweghe, Giovanni Antonini, Jaap ter Linden and Paul McCreesh.

The concert will be preceded, at 6.00 pm, by an introductory presentation by musicologist Gergely Fazekas entitled Prelude, which will be open to anyone holding a ticket for the performance. 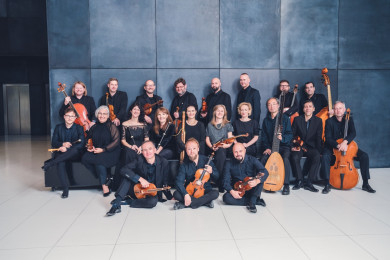