The artistic career of the still-young Emőke Baráth has been one of the most brilliant triumphs of any Hungarian in the recent history of musical interpretation. This time around, the outstanding soprano will be taking the stage at Müpa Budapest as its Artist of the Season, treating the audience to Baroque arias by Purcell, Vivaldi and Handel. Partnering with her will be one of the most internationally celebrated ensembles dedicated to the historically informed performance of early music: Europa Galante. Its concertmaster and conductor, Fabio Biondi, has received great acclaim for his productions around the world, including as a soloist.

Following her music school studies in piano and cello, Baráth enrolled in the harp and voice courses at Budapest's King Saint Stephen High School of Music. She then moved on to the voice programme at the Liszt Academy under the tutelage of Júlia Pászthy, later also earning a degree from the Conservatorio Luigi Cherubini in Florence. Taking part in master classes with Barbara Bonney, Kiri Te Kanawa, Éva Marton, Nancy Argenta, Alfred Brendel, Ferenc Rados, Sylvia Sass and Deborah York, she w...on third prize at the Antonín Dvořák International Singing Competition in 2007 and took first place and the audience prize at the Pietro Antonio Cesti Baroque Opera Competition in 2011, the same year that she won both the Junior Prima Award and the grand prize at the Verbier Festival. Although the part of her repertoire she feels most at home in is Baroque opera and oratorio, singing works by Cavalli, Monteverdi, Bach, Handel and Mozart, she has also sung the soprano part in Mahler's Second Symphony and taken the stage as Nanetta in Verdi's Falstaff. Playing on period instruments, Europa Galante has been amassing successes on concert stages all over the world since its foundation in 1990 with a repertoire that arcs from Vivaldi to Donizetti and in partnership with some of the top singers of our time, producing two Grammy-nominated recordings along the way. 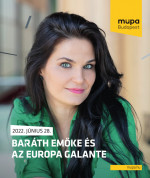