There are two important ideas behind this wonderfully promising concert. The first is that of international cooperation in the European orchestral world, primarily with regard to youth ensembles - this effort first began several decades ago and has paid many dividends since. The second is a question of the scale of the ensemble: the essence of the idea that the historically informed performance movement, led by Nikolaus Harnoncourt, began to spread was that even in the case of the great Romantic composers one did not necessarily need to play their music with the largest possible number of performers: less is often more.

In operation since 1997, the Mahler Chamber Orchestra is a "descendant" of the Gustav Mahler Youth Orchestra founded by Claudio Abbado in 1986 and is made up of former members of the latter ensemble. It packs in 45 musicians from 20 different countries, and they make around 60 or 70 appearances each year - including opera performances. The orchestra has fostered important artistic relationships over the years with such musicians as Daniel Harding, Leif Ove Andsnes, Reinhard Goebel, Jonathan Nott..., Christopher Hogwood, Philippe Herreweghe, Paavo Järvi, Vladimir Ashkenazy, Murray Perahia, Cecilia Bartoli, Martha Argerich, Christian Tetzlaff and Emanuel Ax. Serving as the ensemble's musical adviser since 2006 is the wonderful Italian conductor Daniele Gatti, who has already received resounding ovations from the audience at Müpa Budapest more than once. The set Variations on a Theme by Haydn, the centrepiece of the evening, shows how the Romantic Brahms looked back at Viennese Classicism, while the two works bookending it, Stravinsky's Symphony in C and Hindemith's ballet suite inspired by the life of St Francis of Assisi, Nobilissima visione, are examples of 20th-century Neoclassicism.

We regret to inform our esteemed audience that this performance has been cancelled, which is part of our Orchestra Box season ticket.

Valid tickets can be redeemed until 29 April 2023 via the online interface previously set up for this purpose or our permanent ticket offices. Alternatively, they can be used to buy tickets for Müpa's own productions according to the face value of the tickets.

Thank you for your understanding! 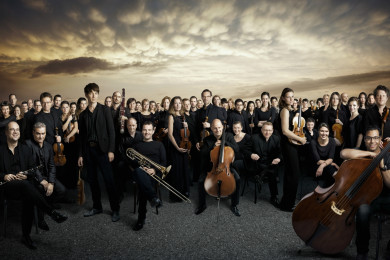 Valid tickets can be redeemed until 29 April 2023 via the online interface previously set up for this purpose or our permanent ticket offices. Alternatively, they can be used to buy tickets for Müpa's own productions according to the face value of the tickets.

Thank you for your understanding!