What kinds of visions does a thoughtful, sensitive man have - in our case the hero of our first ballet, Béla Bartók - when he feels the compulsion to create even as he worries about the future of the world far from home?
Can the fence that stretches taut between the intellectual capacity of the audience and the instinctual nature of dance be broken?
Can a person become an immaculate saint if they thought they were unworthy of redemption all their life? These are just some of the questions that these three one-act dance productions by the Kossuth Prize-winning director and choreographer Tamás Juronics seek to answer.

This three-part dance show by Juronics's Szeged Contemporary Dance Company, now being presented live on the Müpa Budapest stage for the first time, is connected to the institution in several ways. The online première of the "pantomime grotesque” composed to Béla Bartók's Concerto for Orchestra was first shown as part of the Bartók Spring festival. In addition to the persona of the composer himself, the work also evokes the characteristic figures of his works for the stage. Following one af...ter the other in this large-scale visual world are visionary scenes in which allegorical figures represent a not-so-distant era. Two of the winning entries of the 2020 Müpa Budapest Music Competition inspired the choreographies for the other two pieces in the programme. Dániel Lázár's composition Together or Alone became the basis of Wilds: in it, we witness a tribal ritual as the foreign exotic clashes with the civilised intellect. Competition and struggle commence, but the outcome of the struggle is in doubt… It was the music of Viktor Molnár's Mars Mission that provided the starting point for staging The Saint. The one-person, passionate dance builds on ancient pairs of contrasts: human frailty and the vulnerability of the body are countered by the search for faith and the impossibility of striving for good. The dance ensemble's old partner the Szeged Symphony Orchestra, playing under the baton of Sándor Gyüdi, will supply the music for the evening.

The première was presented by Müpa Budapest as a joint event with the Szeged Contemporary Dance Company as part of the Bartók Spring. 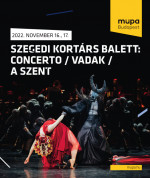