With four decades behind it, the Ballet Company of Győr continues to be in top form as Hungary's leading provincial dance workshop. The evergreen team has been led since 2020 by László Velekei, whose latest creation draws on the catchy tunes of Jamie Winchester and Róbert Hrutka, perhaps Hungary's most successful pop music duo, for inspiration. On stage, the life of a man appears surrounded by all those who fill his monotonous weekdays with meaning: the women accompanying him on his journey.

If you wanted to summarise the Hungarian pop music trends of the first decade of the 2000s, you would be sure to mention the duo of Jamie Winchester, who was born in Ireland but arrived in Hungary fresh faced only to live here for decades and create several bands, and Róbert Hrutka, the youthful 'great old man' of Hungarian advertising and film music, who is also a master of laying down remarkable studio albums. Their journey together began in 2001 with the melody from an advertising film, after... which they spent 7 years inspiring each other and producing hits that don't just make their fans' hearts beat a little faster to this day. On this occasion, the music for the production will be provided live in conjunction with a string quartet and several outstanding musicians. It is to these songs that László Velekei, the choreographer-director of the Ballet Company of Győr, composed a concert-style dance performance: the genre of narrative ballet and the songs with their own stories and unique styles do not make poor bedfellows, on the contrary. In this production by the members of the company, we get to know a man drifting between love affairs, sometimes happily, at other times painfully. His joys and sorrows in the amusement park called life are perhaps shared by the audience. It is the women that appear at the side of this man who fill the stage with life. Sometimes they give him love, sometimes they leave him, and they either adore him or hate him in turn. 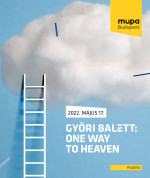 Ballet Company of Győr: One Way to Heaven Details